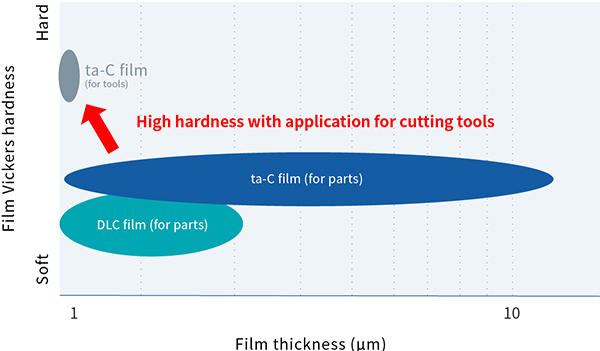 Titanium, Inconel, and other very hard materials are used for aircraft parts to improve fuel efficiency. Kobelco PVD coating is used on tools for machining such materials that have high hardness and are difficult to cut to help improve cutting performance and extend tool service life.
Our proprietary PVD coating system can form (ta-C) film with diamond-like hardness and achieve thick films of 30 μm or more. In addition, it can add properties such as wear resistance, erosion resistance, oxidation resistance, and lubricity, so it can improve durability not only on tools but also aircraft parts. 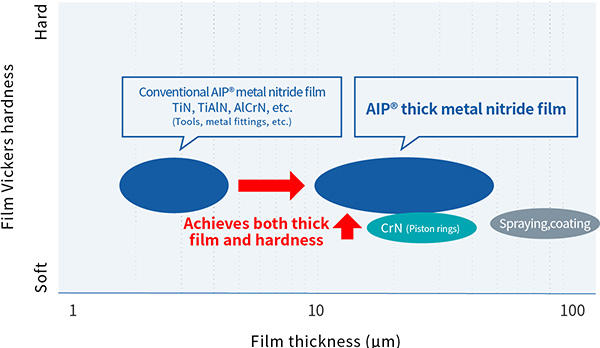 A blisk is an aviation part that integrates the engine turbine blades and disk. Integrating the parts has the advantage of reducing the assembly man-hours and number of parts, creating a lightweight part for improved maximum output and fuel efficiency and lower carbon dioxide emissions, and reducing the risk of cracking (because there are no joints between parts), but the blades cannot be individually replaced, increasing maintenance costs. 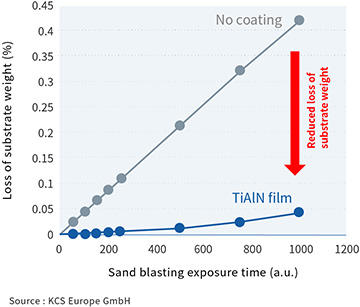 Erosion, which occurs when water droplets collide with the turbine blades, can increase the frequency of maintenance and blade replacement, and controlling the occurrence of erosion is an important issue for reducing maintenance and costs. Kobelco is able to create PVD film with excellent erosion resistance. Coating the surface of the blades improves durability.